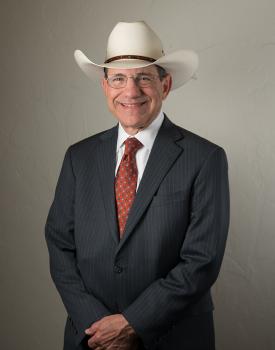 As soon as he felt the snap, Joseph C. Biscone knew something was wrong. His years as a professional bull rider finely tuned his senses, and he quickly recognized the shooting pain in his shoulder as torn ligaments and tendons. Injuries are part of the game in rodeo, and Biscone has had more than his share.

Biscone needed months to recover and rehabilitate. The process reinforced his belief in the importance of good health care and confirmed he had chosen the right field of legal practice – workers’ compensation and personal injury law.

At the Oklahoma City University of School of Law, Biscone became fascinated with law and its critical role in society. His strong sense of justice led him to the courtroom and representing injured workers. Biscone can relate to the problems they face, and he’s committed to them getting the care and compensation they deserve.

For over 40 years, Biscone has used his experience to help Oklahomans navigate the often-confusing legal system. Grounded by his strong faith, Biscone is a man of integrity. He has a caring heart, abiding respect for the legal system and enduring commitment to hard work. Biscone has a lengthy record of success for his clients and has become one of the most respected workers’ compensation lawyers in the state of Oklahoma.

As managing partner of Johnson & Biscone, he has a reputation for aggressively pursuing his clients’ claims and getting the most compensation the law allows. Biscone’s passion for the law has been passed down to his adult children as he works alongside his daughter, Emily Biscone, and son, James J. Biscone.

“We talk to our clients. We return their calls. We give personal service. I don’t think many other firms, at least in the area we practice, do that. We are serious about looking out for the people and families we represent. This is all about justice,” said Biscone.

When he’s not looking out for injured workers, Biscone still competes in team roping events. He brings the same tenacity and enthusiasm to the courtroom that he does to the rodeo arena. Joe knows the ropes and is dedicated to his clients.

That’s why injured Oklahomans trust the man in the hat and boots – the cowboy lawyer, Joseph C. Biscone, II.

Fixing Clients' Lives, Not Just Legal Problems
Who Is Liable if I’m Injured in a Car Accident Caused by Poorly Maintained Roads?

In most instances, car accidents are caused by the negligent actions of a driver.

What Are the Laws Governing Medical Malpractice Cases in Oklahoma?

If you’ve been injured due to the negligence of a medical professional, you may be entitled to file a medical malpractice claim to recover compensation for your damages.