Mother & Daughter of Bombing Victim Get Help From OKC Lawyers 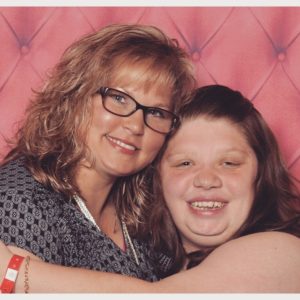 Nicole Templin Flick was in the last trimester of her pregnancy when she lost her husband, Scott Williams, in the Oklahoma City bombing on April 19, 1995. Her daughter, Kylie, never had a chance to meet her father.

As a toddler, Kylie was diagnosed with sensory integrative dysfunction, possibly caused by the stress her mother suffered during the pregnancy. Kylie struggled with disability issues her entire life. As a result of her father’s tragic death, Kylie was able to receive workers’ compensation death benefits.

However, the family received word from their insurance company that the benefits would stop when she turned 18. Because of Kylie’s special needs and her dependence on her mother, the two could not live without the critical compensation that they were receiving. Nicole started making phone calls, desperately searching for help. No one had answers, until one phone call changed their lives.

“In a world with so much hatred and sadness, people like them give me faith in the human race. For their kindness and compassion, I am forever grateful!” Nicole said.

For a year and a half, the Biscones worked closely with Kylie and Nicole. They conducted extensive research on the ever-changing Oklahoma workers’ compensation law and its avenues to help Kylie and Nicole.

“Emily took our case because she felt it was the right thing to do. They worked with us from the beginning knowing they may not be compensated,” said Nicole.

In August 2016, Emily Biscone presented Kylie’s case before the Oklahoma Workers’ Compensation Court. Through the presentation of the facts and a touching explanation of the request, Emily was successful in continuing benefits for 21-year-old Kylie.

“I feel honored to be able to help this family. Kylie and Nicole were fantastic along the way, always very gracious and kind. They needed our help, and I wanted to stick with them until the very end. This is a moral victory,” said Emily Biscone.

Kylie and Nicole breathed a sigh of relief at gaining a continuance of benefits to support their livelihood. They have also gained a new extended family.

“I’m so thankful that God put these precious people in our lives, not just as our attorneys, but our forever friends. They treated us as if we were their family,” she said.